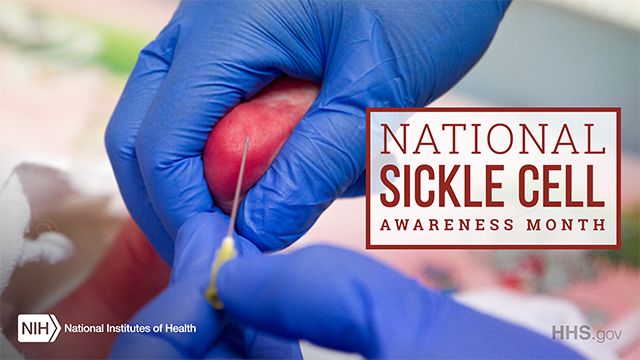 For nearly two decades, a bone marrow transplant has been the only known cure for sickle cell disease, an inherited blood disorder that can cause excruciating pain for those who have it. But very few patients have qualified for the grueling procedure. And they’re mainly children, who can better tolerate the high doses of chemotherapy needed to wipe out the bone marrow, which doctors then replace with matching donor stem cells from a sibling.

Today, researchers at the National Heart, Lung, and Blood Institute (NHLBI), part of the National Institutes of Health, are on a fast track to change that bleak outlook. They are working hard to expand options that not only treat sickle cell disease, but also cure it. From new transplant approaches to new genetic therapies, the treatments, these researchers say, could be game changers in the not-so-distant future.

An investigator in the Laboratory of Early Sickle Mortality Prevention, part of NHLBI’s Cellular and Molecular Therapeutics Branch, Fitzhugh’s latest transplant regimen has been recruiting adults with sickle cell disease for a clinical study since 20171, and the results so far have been encouraging. Instead of completely replacing a patient’s bone marrow with that of their donor, Fitzhugh says it’s now possible to reverse sickle cell disease using a mixture of donor and patient cells. Eligible participants only need a relative, such as a parent or child, whose stem cells only partially match the patient’s. This change—from needing a full match— increases the patient’s chances of finding a suitable donor from 10% to 90%. Further, because this approach does not include high dose chemotherapy, patients with severe organ damage may be eligible for transplant.

Before receiving donor cells, participants will need to take a combination of medications to suppress only part of their immune system and reduce the risk of graft-versus-host-disease, a serious complication that occurs when donor cells recognize the patient’s healthy cells as foreign, then attack them. Fitzhugh will follow participants three months after the transplant to make sure this complication doesn’t occur. She also wants to ensure that the donor cells aren’t rejected and the disease hasn’t returned. Patients will also be followed for many years afterwards to evaluate efficacy of the procedure and to check for any long-term effects of the transplant on their organs.

Also in the works are a number of genetic therapies2 aimed at correcting the abnormal beta globin gene that results in rigid, sickled red blood cells that wreak havoc on the body, especially when the blood cells are exposed to low oxygen levels. Gene addition therapy, said John Tisdale, M.D., can restore the missing function of the faulty gene by adding a new gene to bone marrow stem cells harvested from the patient. The new gene—a normal version of the faulty gene—would then produce healthy red blood cells.

“We’ve been able to reduce frequent pain that lands patients in the hospital by using this gene addition therapeutic approach in combination with a conditioning treatment that creates space in the marrow,” said Tisdale, chief of NHLBI’s Cellular and Molecular Therapeutic Branch. “The reduction in pain has been remarkable, and this approach is working. It’s really exciting.”
Another newer curative therapy is gene editing, which researchers could use to reactivate fetal hemoglobin that is typically present during fetal life. When sickle cell disease develops, a misspelled adult hemoglobin is soon replaced after birth.

Investigators don’t yet know which therapeutic approach will reach patients first, but Traci Mondoro, Ph.D., chief of NHLBI’s Translational Blood Science and Resources Branch, said the groundwork is being laid to make sure whatever emerges is effective. Mondoro helps manage NIH’s Cure Sickle Cell initiative, which supports research into promising therapies like these so that they can be safely used in clinical research in the years to come. It also adds to existing efforts being funded by NHLBI, such as basic biology and pain research.

“Therapeutic approaches, such as gene therapy and gene editing, are still in the early stages,” said Mondoro. “While these approaches are not suitable for all, we are also working with a sense of urgency to research other treatment options for older or sicker patients.”